When we reach this fourth day of creation, if we have been reading in sympathy with the naïve observational perspective of the author, we are no longer troubled by what we described earlier in this book as a “very good question.”  We will no longer wonder how there could have been light on the earth starting from the first day, if the sun was only made on the fourth day.

Instead, we will find here confirmation that the “light” created on the first day was not understood to be the light of the sun, but rather the light that appears in the sky each day with or without the sun. Indeed, the sun is not described here as the source of all the light in the sky, including (as we would understand today) the light of the moon. Rather, the sun is believed to have more limited functions: With the moon, it “separates” the day from the night; it allows people to mark the passage of time and to establish fixed times; and it gives light on the earth.

The second and third functions are relatively easy to understand from the author’s perspective. Before clocks and calendars, months were marked off by the phases of the moon, and a year’s circuit by the sun’s return to a given inclination above the horizon. A time and date for a meeting could be set by the height of the sun in the sky and by the shape of the moon. The earth is much more brightly illuminated when the sun appears, even though there is always light during the day.

But what did the author have in mind when he said that the sun and the moon would “divide the day from the night” (v. 14) or “the light from the darkness” (v. 18)? “Division” or “separation” into realms is the basic principle of creation in this account; the dome “separates” the waters above from the waters below (vv. 6-7), and God distinguishes the light by “dividing” it from the darkness (v. 4). But what further do the sun and moon add to this accomplishment? We might say that the sun keeps the darkness from encroaching on the light by ensuring that it is always light during the day, but this explanation breaks down when we consider conversely that (1) the moon does not, for its part, maintain the night in a state of darkness and (2) it does not even stay within the realm of night. That is, we often see the moon in the daylight sky.

Put another way, the time-realm of the sun and the time-realm of the moon are not synchronized so as to remain mutually exclusive. We may picture either the sun encroaching on the moon’s realm, or the moon encroaching on the sun’s realm, but either way, even if we begin observation at a point when the two are distinct, eventually we will see them become concurrent and then diverge again, over and over. If it is nevertheless intended that the sun and moon “divide” the day and night by marking those time periods, respectively, by their presence, then the best we can say is that we do tend to notice the sun during the day and the moon during the night, and thus to think of day as “sun-time” and of night as “moon-time.” These associations, in fact, fill popular verse and song to such an extent that we must admit that the sun and the moon do, in our collective imagination, mark and distinguish day and night.

But these are not the only ways in which the account of the fourth day confounds our modern cosmological expectations. Perhaps even more important is the effect of a small preposition: “in.” Genesis tells us that God set the sun, moon and stars in the dome of the sky (vv. 14, 15, 17).

We today would instead place them beyond the sky – outside our atmosphere. Even if we grasp the idea that the Genesis author is picturing a solid sky, we might still imagine these lights shining through from the back. But the account says quite clearly that they are in the dome. The particular means by which they are attached is not specified; nor is the means by which they move through the sky. But there can be no doubt about where they are, and it is not where modern cosmology would put them. Nevertheless, it is exactly where they appear to be, to the naïve observer.

With the sun, moon and stars in place above the earth, the cosmic superstructure is complete. And so our exercise does not require us to go farther than this fourth day. (But illustrations of the remaining two “work days” of creation will be shown below, to complete the picture.) Indeed, we should recognize that from the author’s perspective, the superstructure was actually complete after the third day, once the division into realms had been completed: day and night; sky and sea; sea and land. The heavenly luminaries, like the creatures of the fifth and sixth days, actually populate realms already marked out. It is only because we now think in terms of a “solar system” that we consider the sun and moon with the interest of an architect, rather than that of an interior decorator deciding on track lighting!

By now we should realize that Genesis, when understood as originally intended, does not present an objective scientific account of the origins of the universe. It rather presents a phenomenological account—that is, it describes how things appear and how they appear to have been made. We may now proceed to consider the implications of this realization, first for the scientist, and then for students of the Bible.

The fifth day of creation: Birds fly in the sky and fish swim in the sea.

The sixth day of creation: Animals and humans populate the land. 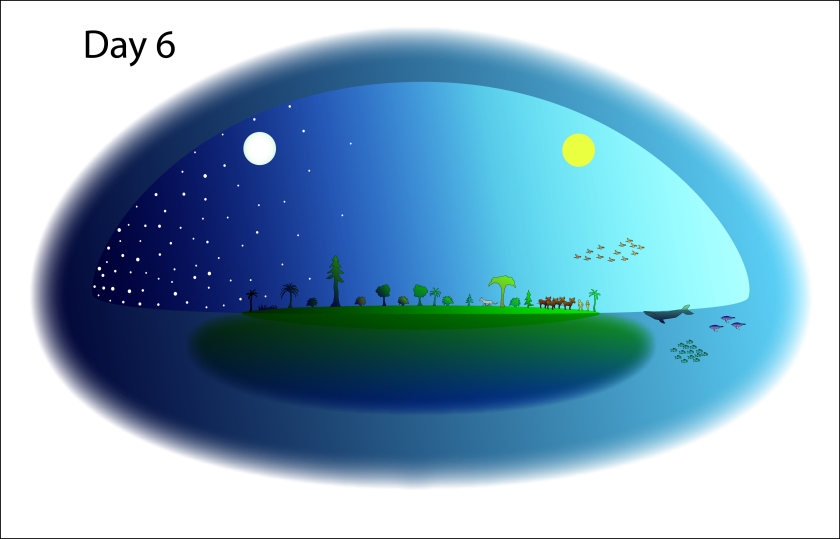 2 thoughts on “53 Day 4 according to ancient cosmology”